Baccarat is considered to be the game of luck among the variety of the gambling. However, there are still the players that resort to cheating strategy in baccarat game at baccarat tables in order to get the winnings.

Sure thing, it is impossible not to mention the well-known Royal Baccarat Scandal that was imprinted in the history of the gambling with the help of one of the first famous casino cheaters - Sir William Gordon-Cumming.

Indeed, one of the most interesting cases of the baccarat cheating was dated 1890, when one of the scots guards was accused of cheating with participation in gambling process of the future King of England Edward the Seventh.

The matter is that the King Edward was dragged in this very scandal by accident. This case made the officer Sir Gordon-Cumming, the fourth baronet, who was from the scots guards popular and remarkable even now in the realm of gambling cheating after he spent a night at gambling. Thus, on the 8th of September in 1890, Prince together with Sir Gordon-Cumming was among the guests of the Tranby Croft owned by the shipbuilder Arthur Wilson. All the guests enjoyed playing baccarat game that at that very time was considered illegal in England, though the favorite game of the future king. 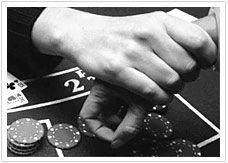 During the game playing, however, several gamers noticed Sir William was evidently cheating by means of altering of the bets amount he had on the playing table after he won or lost a particular hand. He resorted to use of cheating strategy in Baccarat. The next evenings the players were observing more closely and later confirmed the actions of the officer. Sir William managed to win with the help of cheating about 228 pounds within the two days of gambling.

On the 10th of September, in the morning some of the players had a conversation regarding the behavior of the officer. However, the players after negotiations decided to tell the Prince about the trouble. Accused William first swore he did not do anything wrong, but later signed the pledge that he would never play cards and cheat again. In turn the matter was supposed to remain in secret, but anyway the story was spread over and fixed in sources later on as one of the first attempts of cheating at casino.

Anyway the story is a good lesson that cheating strategy in Baccarat just like in any other game is hazardous adventure.