In the history of gambling there is a range of illustrious gamers who managed to cheat the most professional supervisors and casino authorities and make money.

They were imprinted in the gambling history forever due to their extraordinary life styles and gambling adventures. Among the blackjack cheaters the most famous are considered to be the following swindlers: 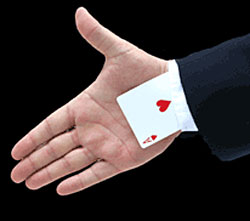 However, unlike Joe Classon Jerry did not happen to observe any cheating tricks during the military service, sure thing, and had no previous gambling or cheating experience. He found out about cheating from his best school friend - Duke Wilson.

After the discharge from the army he hooked up with his old friend in California. Here Duke grew marijuana. In order to support this business Duke was cheating with Classon's team at casinos. Duke also explained to his friend how the team was going to hit in Las Vegas and Reno with the help of past posting art of cheating. Finally, he joined the team.

The fellow cheaters nicknamed Mark Abramovitz as "Balls," due to the fact that he was a stalk-thin, mad, and wild Jewish gamer who used to smoke even more than he could eat and never resorted to the demonstration of anything, except his recklessness in pursuit of winning scores without the fear of what his cheating might cost. He is considered to be the multifunctional cheater in the gambling history.

Sherri Skoons is known to be one of the most famous female casino cheaters in the gambling history. She was professional past poster. Born in 1961, she started her cheating career simply as the friend of Salvatore Gillette. Salvatore Gillette was one of the Richard Marcus's past posting members in the 90s. Sherri Skoons usually participated in the team's trips and operations performing different minor duties in the process.