Second dealing is considered to be the method of cheating that presupposes manipulation of the playing card deck during cards games with the help of dealing the card which is rather the second than the top in the deck. It is one if the major land casino cheating methods.

The way it works 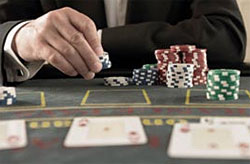 It is also considered to be one of the most common and easiest ways of getting the advantage over the house. However, the best use of second dealing can be reached with employing of the card marking.

However, when card marking is of no use in cheating the second dealer still can gain the advantage by means of flashing to the collateral, for example, peeking, and receiving different signals.

It is also possible to use different mechanical devices that can help to see the top card in the deck while gambling.

Second dealing is conducted while dealing the cards from the hands of the dealer. Thus, when holding the deck, the second dealer can either push the very top card up or display the partially exposed second card of the deck.

The cheating method is widely used in the dealing during regular shoe or gaffed shoe.

The special practice of the burning card was developed in order to prevent the second dealing cheating. If the burn cards are used, the top card is considered always to be discarded and the second one is dealt. Such means is implemented for prevention of gaining some information by the payer about the next dealt card as far as the second card is concealed by the card top. It is interesting to know, however, that ironically the second card deal can be used in order to discard the second from the deck and deal the original card anyway. The back design of the cards usually can either help or complicate the second dealing cheating.